Material/Resources: 16 Figures (4 of each color) and 1 dice.

Purpose: Getting all 4 Figures inside the shelter first.

Description: Each player has a house with 4 fields, where he/ she puts his/ her 4 figures. To move them out of the house, the cube has to show a “6”. After a “6”, the players can move out one figure to the first square and throw the square again, to make the first move. Until the last figure is moved out of the house, the “6”can just be used to get the figures going out of it. During the game, the “6” means that you can throw the cube again. Now, each player has to try to get all the 4 figures to his/ her special shelter. The first one to have all figures inside the shelter wins the game. During the game, figures of other players can be kicked back to their house, by stepping on the same square. 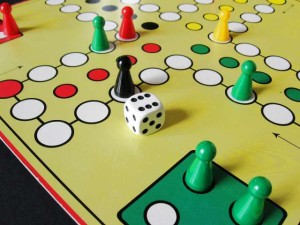 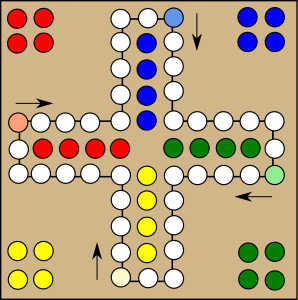 This entry was posted in games. Bookmark the permalink.