Mirakolix > Resources > games > “How the world is? ” or how to teach science to children

“How the world is? ” or how to teach science to children

“We are two Scientists who came to Întorsura to reveal the most important and hided secret in the world!! One of us is 78 years old (Ionuț) and the other one is really young (Bianca)! We came here because these kids of the kindergarten have to help us to solve these hided secrets!” – this is how starts the story created by the two volunteers of Science Playgrounds project for the kindergarten Roma children of Floroaia Mica School. 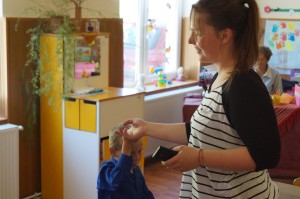 Ionuț won the Nobel Prize in 1963 with some investigations that proved that the world was plane. He was really proud of this and the entire world believed him. But some years after this achievement, he discovered that was not true. But he was really ashamed and he didn’t want the people know that he was wrong. So, he went to the “True World” (adevăr-lumea), a globe who’s keeping all the secrets of the humanity, and stole from there the continents of the globe, just to be sure he would be the only one who knew this.

Few years later, Bianca, a scientist really clever and smart was not believing this and s 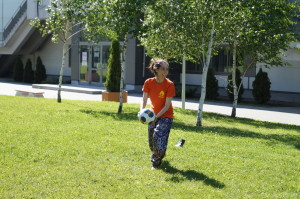 he also start new experiments to check if this was true or not. She found Ionuț was wrong!!!!! But she could not demonstrate it without the “Adevăr-lumea” help. She was looking years and years in order to find the globe and ask him if she was right. After years of searching she found it, but it was not completed, so it could not say anything. That’s why we came to Întorsura Buzăului, we need the help of these young kids to know the truth!!!

Human resources: 2 volunteers + one teacher for helping with the translation

To discover the adventures of the two scientists-volunteers click the links below:

These activities are part of “Science Playgrounds” project, which  has been funded with support from the European Commission. This communication reflects only the views of the author, and the Commission cannot be held responsible for any use which may be made of information contained herein.