It’s only few days since I came back to Barcelona after my 12-months EVS project called “Inside Journey” which took place in Braşov. At the beginning we were 4 international volunteers from Germany, the Netherlands, Italy and Catalonia, although for different reasons we lost some members on the way.

To be honest, when I landed in Romania I didn’t know so much about the country, its traditions… (in 3 weeks I applied to the last call, did a Skype interview, got accepted to join the team, signed all the documents needed, packaged my luggage and flew to Dracula’s land). However, I guess it was better, as I didn’t have time to create expectations and I could enjoy better this amazing experience that the EVS is.

Besides “Inside Journey”, there were other 2 projects in Mirakolix: “Inside Ride”(IR) and “Reshape Urban Places”(RUP), with whom we collaborated in different activities and events. So suddenly you found 12 volunteers from 7 different nationalities, new in the city, with different expectations, backgrounds and habits, but willing to enjoy and take advantage of the 11 months of their EVS in Braşov. With the time passing, we became a family and we were spending more and more time together in the terrace, sharing nice dinners, hiking and travelling around Romania…

The beginning of our stage was a little unclear as we didn’t have a fixed target group, so we went to different high-schools to introduce Mirakolix and the activities we were planning to start. Maria mastered a body percussion workshop (with its Christmas flash mob) and Mirco trained us and other youngsters in his work’out. Also, played different board-games and traditional games from the different countries we are from and we learned new techniques of handicrafts within the “Sezatori Urbane” of RUP. 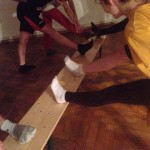 Some stretching to warm up 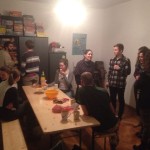 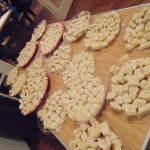 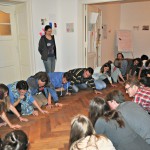 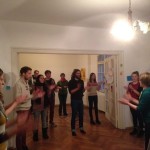 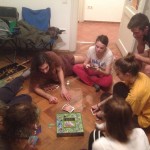 Playing a game after the Workin’ Out

The new year came with lots of new activities: we watched movies and documentaries in the cineforum and discussed them with Thomas and Pierre; Mirco added a strength workout to the conditioning workin’out; we discovered the gastronomy and traditions of different countries in the International cooking workshop I was doing with RUP; I started to run Spanish lessons for beginners; Thomas and I did different team-building games and emotional intelligence activities with youngsters in Colegiul Grigore Moisil, and I collaborated with IR for the hiking day in Întorsura. 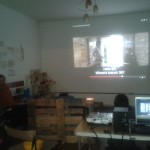 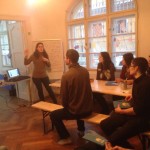 Explaining how to introduce yourself 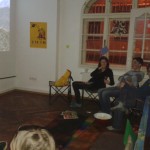 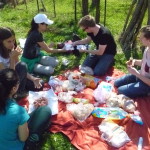 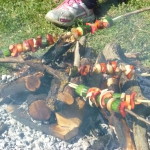 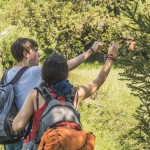 Also, when the warm of the spring arrived at Braşov, all three projets went to the park to do different activities and workshops, as well as to play some board-games and to walk on the slackline, as a previous step to the 2nd edition of the festival Ceva de Vara. 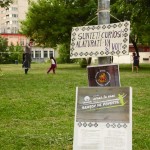 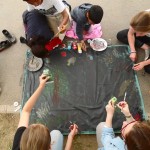 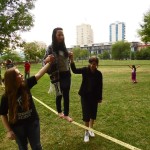 During 4 days, Eglé and I organized the Fest-camp in Acriş, in which local volunteers from Braşov, Întorsura Buzăului and Predeal took care of the decoration and the area of the festival while sharing a nice experience, building new friendships and enjoying the nights around a bonfire. 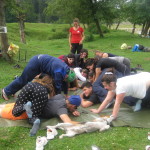 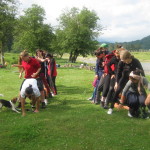 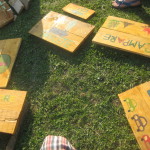 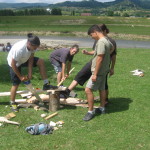 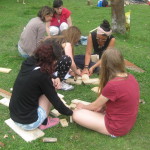 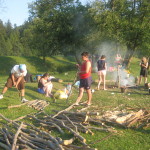 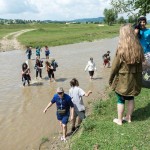 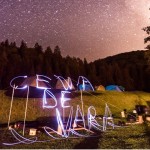 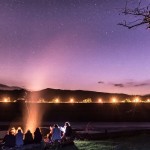 Just after the camp, it took place in Întorsura Buzăului the second edition of Ceva de Vara, a two-days alternative festival in which more than 750 guests had the chance to play board-games, do different handicrafts and active workshops, do an orienteering and bike contests, climb a tower of beer boxes and cross the area of the festival in a zip-line, relax in tires-seats or slack-line and enjoy different performances and concerts. It was a lot of preparation but the result was a success and many local volunteers were already asking for a next edition. 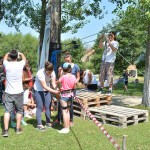 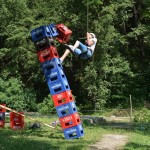 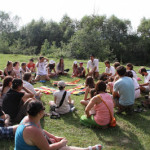 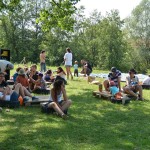 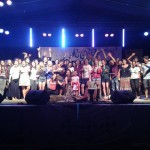 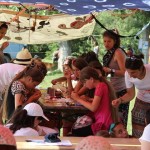 To sum up the three projects (IJ, IR and RUP) we adapted the idea of “Braşov de poveste” into “EVS de poveste: the story of international volunteers”, where we challenged our guests to experience different activities and workshops in the different lands that represented the different stages of our EVS and the projects.

Finally, in September, when the other volunteers left Braşov, I wrote the youth exchange project “Traditions cross the borders” with the help of Alex. With that project I wanted to bring to Romania a space where young people from different European countries could experience outdoor activities to promote Cultural Identity, Multiculturality, Participation and Volunteering.

Looking backwards I realize that I did many things in the last twelve months, I’ve learned a lot about myself and also new skills, and I’ve met a lot of people from around the world (my “Brasovian” family, volunteers who were doing their EVS around Romania, people who were attending the CS meetings I was organizing, and the youngsters from Braşov, Întorsura Buzăului and Predeal who came to our events, the camps and the festival Ceva de Vara). Moreover, I had the chance to visit many places in Romania, to hike different hills and to enjoy the amazing landscapes that Romania offers.

This is an experience that I’ll never forget and that I would repeat without hesitating. Because I fell in love of this country and its people, and I’m looking forward to come back again!

This entry was posted in Cine suntem?, Povești/testimoniale. Bookmark the permalink.