Mirakolix > What we do > Activities > Make Your Own Snapshot

Make Your Own Snapshot

What an interesting title – ‘Snapshot’. You probably wonder what is ‘Snapshot’? That is a nice board game which almost anyone can play! And it’s really easy.

Each player receives a wooden disc and set of cards which show missions that have to be accomplished. The discs which are not used (there can be 2-6 players and 2-6 used discs therefore), are placed on the board randomly. On the board, there are also other obstacles. In your turn you reveal the top card of the face-down set of cards you received and you have to reach the dice or active spot which is showed on the card. When you have done it, you put the card aside and reveal the next one.

There are some active spots on the field that allow you to move obstacle, get rid of gemstones, reveal extra card or gain extra turn. And in the corners of the bord you can gain gemstones which you need to win.

Who wins? The one who has accomplished all of his/her missions, gained exactly two gemstones of each of the three kinds and returned to the starting point.

What makes this game more interesting? You can move around the board (or move the board itself) and you are only allowed to snap your disc (you’re not a llowed to pusch it). 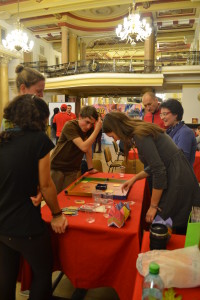 We thought that this active/moving element is so nice that we wanted to highlight it even more. So we decided to make the game live-size so that we would really be forced to move while playing. We didn’t realize how energy-taking and fun it would be! 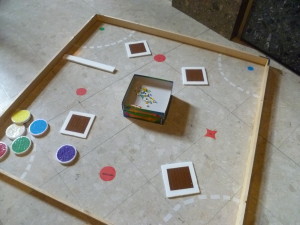 Are you also interested how to make Snapshot live-size? It’s not so hard. You can take a bus (or drive a car) to closest construction store and buy just few things there. You will need four planks each about 1,5 m long (or longer, if you want to make the game even bigger!), few foam rubber plates (around 1,5 cm ,thick) and four metal corner angles to fix the planks in a frame. Like this: 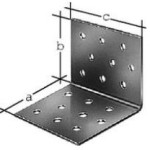 To make the frame you will need electric drill.  For discs, obstacles and setting up the game you will also need paper knife, white tape, cardboard, tape which is sticky from both sides, transparent tape, marker and colorful paper (in 7 colours). 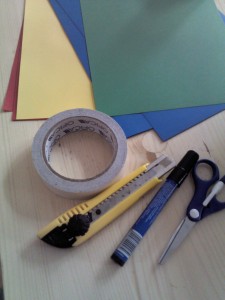 And what next? The frame was the easiest part. Now you have to make discs and obstacles out of  foam rubber.

Decide how big the discs should be. Ours were around 12 cm in diameter.  Make a pattern in the size of discs. Use the pattern for drawing on foam rubber the circles. Cut them out with the paper knife. For one disc you will most likely need two of these circles. Then you can stick them together with the tape (this is to make them a bit heavier). Aterwards you give each disc a different colour by putting colourful paper circles (smaller than diameter of the discs) on them and stick them on the discs with the transparent tape. Make 6 discs like this!

You will also need obstacles. For this you can cut four squares out of foam rubber (around 20×20 cm).  Put a colourful paper (smaller square) on them, stick with a tape.

Last obstacle is just around 30-40 cm long foam rubber rectangle (about 7 cm wide) made from two layers of foam rubber (like the discs). 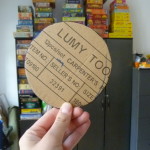 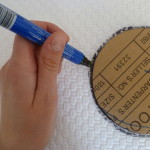 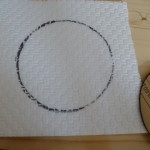 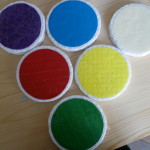 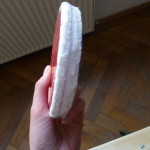 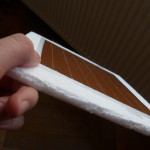 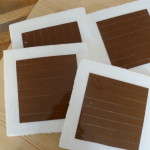 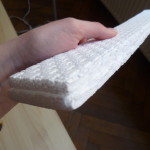 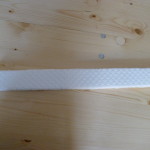 Now it’s time to set up the game! Put the frame on the ground (no carpets under it). Try to find as flat surface as possible. Mark corners with pieces of white tape (they should be of same size). Put a cardboard box right in the middle (it can be of size of original Snapshot box J ), make it heavy, unmoveable. Put obstacles on the board. Put color indicators in three corners (small colourful circles, around 5 cm in diameter) – green, yellow and blue.

Done? Start playing! You can use the original Snapshot cards (like we did) or make your own cards. You can also use the extra-turn indicators and gemstones from the original game. 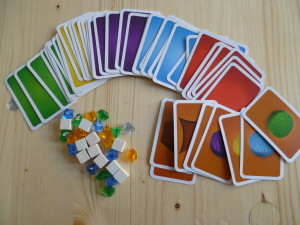 Don’t be shy! Walk around, step inside the board, then outside again! Move! Play! Have fun! Win !