Mirakolix > What we do > Events > Methods of non-formal learning

That is how the non-formal learning festival CONNECTOR was introduced. From 18th to 24th November 2014 our twelve EVS volunteers visited this festival in Cluj-Napoca.

There they got to know many different methods of this style of learning. Below you can find descriptions about the following methods:

My facilitator Kristina was an artist from Finland. Before dealing with Environmental Art, she was a sculpturer and she showed us some of her works, bronze castings and abstract sculptures.

What impressed me most about the workshop was to learn in praxis and theory, how easy it is to create art with or/and in your environment. Famous artworks have been made from old bottles, cans or wires. You can also send political or social messages: in the eighties, there has been a young woman who planted a field of wheat in the middle of Manhattan.

Another important aspect about Environmental Art is transcience. Many artists let nature take its course in order to create an art piece and it can take months until it is completed. Or use vegetable or animal material and let it rot.

Our task for the workshop was to set up our own exhibition and to use as much material from the park nearby as we could.

You can see the results at the pictures. The only new material we used was cotton thread and some tape. 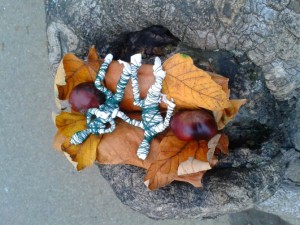 During the Connector event in Cluj-Napoca I was participating in the workshop Environmental Art. The main idea of this method is creating something (a piece of art) of nature, with nature, in nature, for nature. The beauty is its simplicity, you only need a few materials such as rope, invisible fishing rope, scissors, and tape. The other materials you will find in the nature. Discuss with different people, go outside and let nature inspire you, take time to create your masterpiece, and try to merge it – as far as possible – with its surroundings. Besides that, you could make a statement with your creation, for example an artwork of rubbish or put a small piece of waste in your design. 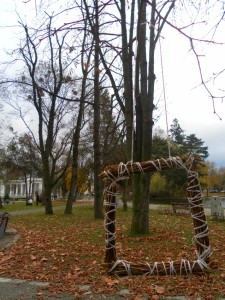 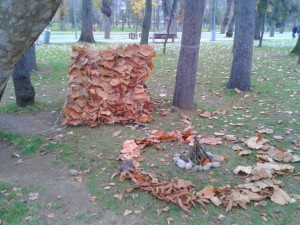 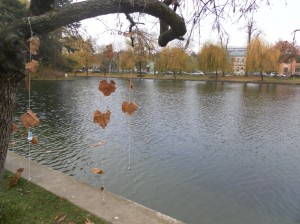 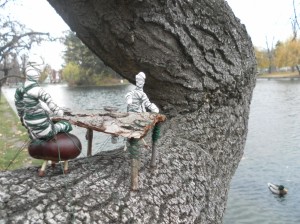 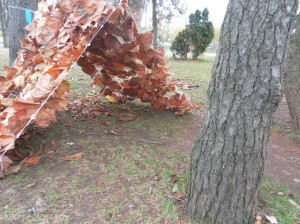 Did you ever noticed some problems between people and within society but find it difficult to work on them or to even solve them?

Forum Theatre might be a good method to bring problems on stage, to let the audience become aware of those and to give some hidden advices for solution. Since it is much easier when many people know about a problem and ways to work on it Forum Theatre is a good way to make local, social and society problems to a topic on a concrete but soft way.

A Forum Theatre session consists out of two parts. During the first part the actual play takes place. The duration is about 10 – 15 minutes. During this the joker who is leading the whole session announces every scene for that the audience is aware about the specific content of each scene. Usually there are 3 to 5 scenes. When the first part is done the second part starts with the joker leading a conversation with the audience. He talks with them about the play, the characters and the concrete storyline. Together with the audience he finds the main problem of the story. The majority of the audience has to agree. Then the joker explains the following process: the play will start again. Each time a person of the audience wants to change the behavior of one of the characters he or she has to clap. Then the person comes on the stage and overtakes the role of the character for max. 1,5 minutes. Afterwards the audience is being asked by the joker whether they think the proposed change of the character is a) realistic and b) whether it contributes to a better outcome. If so, the actor whose character has been changed overtakes the change and continues playing. Logically the whole storyline including the other characters changes afterwards. In total, more than one change can be done. The general rule is not to change the oppressor. If the audience does not want to overtake the proposed change the play goes on as before. After the play is finished the joker summarizes together with the audience what has happened. The Forum Theatre session is terminated.

Concerning the play as such it has to be mentioned that there is always one oppressor, one oppressed, friends of both each and a neutral character. The maximum amount of characters is from 6 to 8. The content of the play has to contain one main problem that is realistic. The tension increases throughout the scenes. Scene 1 is a kind of introduction (especially of the oppressed), in scene 2 the relationship between oppressor and oppressed is being portrayed and in the 3rd scene the problem and tension increase ending with a wrong decision on the part of the oppressed. Basically it is all about power. The oppressor has much power while the oppressed has absolutely none.

The actors only have a framework in which they are acting – the rest is improvised, especially the 2nd part of the Forum Theatre session.

Forum Theatre can be done out of two intentions: on the one hand the actors can be people who want to raise awareness about social problems. On the other hand the actors can be people the facilitator works with to raise their awareness about problems in their own social environment. The basic rule here is: do not let victims play the oppressed and oppressors play oppressors. The actors can choose their roles by themselves but choosing the same role as in real life could cause even greater problems and can encourage the actors to stay in their real-life-role.

In general, Forum Theatre can be implemented with people that are older than 12 years.

I was lucky enough to participate in a workshop which was my first priority of three. It was called „Human Centered Design Workshop” and my trainer was Camelia Crișan who works at Progress Foundation (http://www.progressfoundation.ro/index.php/about-us). The workshop is, as I understood it, a zipped version of what she has offered or still offers as trainings to different organizations.

On the first day of our workshop we introduced ourselves to others and also said few things about organizations we represent. I was very surprised to find out that I am the only volunteer in the group of around 10 people. And there were people not only from NGO’s but also from government institutions.

Trainer introduced us with her unlucky experience with shopping on-line, and we were asked also to share our stories of bad service we’ve received. Shortly after we were asked to come up (in smaller groups) with a service we would like to offer to youngsters.

Afterwards we were given a wonderful task. We were asked to visit two places in Cluj (for my group it was Transylvanian History Museum and cafeteria called „Mozart”  or „Amadeus”) and to pay attention to services they offer and the way they offer them. For me it seemed like an amazing task because I never pay a lot of attention to how I’m treated in different places as long as I get what I came for.

And when we had presented and analyzed our experiences, we had to improve the service we had made previously.

On the second day our trainer played a little energizer with us that in the end lead us to conclusion that in order to influence (or inform) as many people as possible, we have to contact „key persons” or „influenciors” who could most likely deliver the information to others.

But then we continued with our services. We had to make improved posters of service we had made previous day. And then we went out on the street, tried to find our target group (youngsters) and told them about our service. We asked them how it sounds to them, is it important to them, would they come, if not – why?, is something relevant missing in our service, do they have any suggestions for improvement etc.

And some of the people we talked to really gave really nice, structured, argumented information and suggestions. So, in the end we were able to add even more details to our service and make it a little bit better service.

So, find out what’s important for others, ask them what they want, understand how you want to be treated and treat others the same way. It just has to make sense to people.

My workshop was hosted by two very nice people. Jean-Baptiste, the leader and person in charge for the method and Ade, who helped him by translating and introducing the methods.

All in all, we were almost 15 people in our workshop, which I think, was a good size of the group, in order to work together.

The method was quite simple. In the room, we had different instruments (big and small drums, sticks, tambourines, etc.). Everyone got one instrument, he/she liked and we started one after another, to create beats. The drums started with a ground rhythm and then the other groups of instruments started to join. There was always one leader for a session, which gave signs to all the people.

We also played on recycled instruments, like beer boxes, buckets, bottles and so on. Those you can find on the streets or in the garbage. We painted them and personalized them. Everyone presented the sound of the instrument and we divided them in groups, according to the sound and created beats and pieces with the same method.

The same things were presented life on the streets afterwards.

The workshop was really nice and I would recommend the method, because it’s an easy way to connect people through music. I would suggest to have at least one more experienced person, which is leading the sessions, in order to have fluent song.

This entry was posted in Events, Festivals, Resources, Useful materials for various activities. Bookmark the permalink.